All Articles/Already Retired/Win or Lose, the Brexit Won’t Sink Markets

Even if the ‘Leave’ side wins, Britain’s EU exit could take years.

Already Retired, On Your Own, Thinking About Retiring   |   Better Money Decisions August 13, 2016 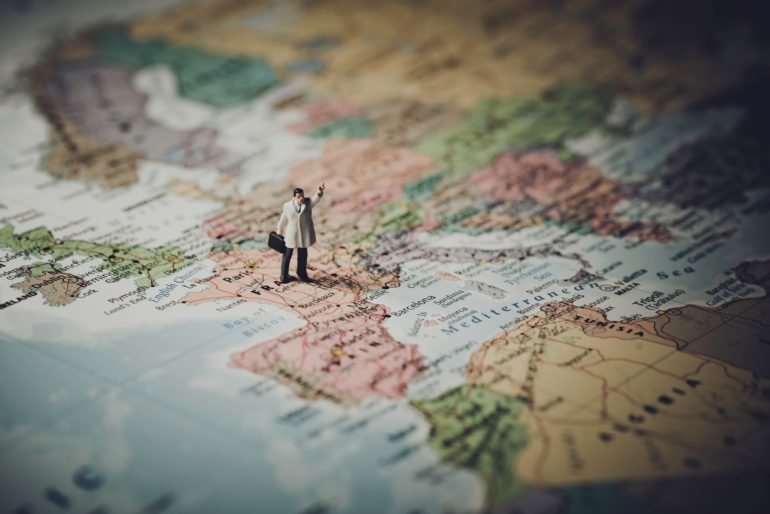 The term “Brexit” — a portmanteau of “British” and “Exit” — is cute, but the uncertainty surrounding the outcome of tomorrow’s U.K. vote on whether to quit the European Union has been anything but. It’s been roiling markets for weeks, although I don’t view Britain’s possible departure from the EU as something that spells imminent disaster.

What happens if Britain votes tomorrow to leave the European Union?

According to the Organization for Economic Cooperation and Development, quitting the EU would have an immediate negative effect on U.K. gross domestic product. The OECD forecasts that in just the next few years, the British economy could shrink by some 3%.

A recent OECD study attributes this expected decline to lower labor productivity and decreased foreign investment. This chart projects future GDP declines for both Britain and the EU from baseline assumptions if the Brexit passes:

That would be a big setback internationally, as the United Kingdom accounts for about 5% of the global economy. We might also expect negative effects on global stock markets, which have already offered tepid returns and hyper-volatility over the past two years.

Longer term, the OECD believes that a post-Brexit British economy could shrink nearly 8% by 2030 in a worst-case scenario: 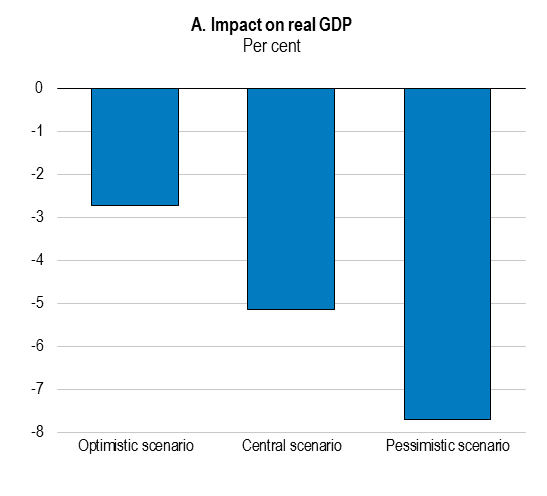 The group’s middle-case scenario also estimates that this could reduce annual U.K. purchasing power by some 3,200 British pounds ($4,687) per household: 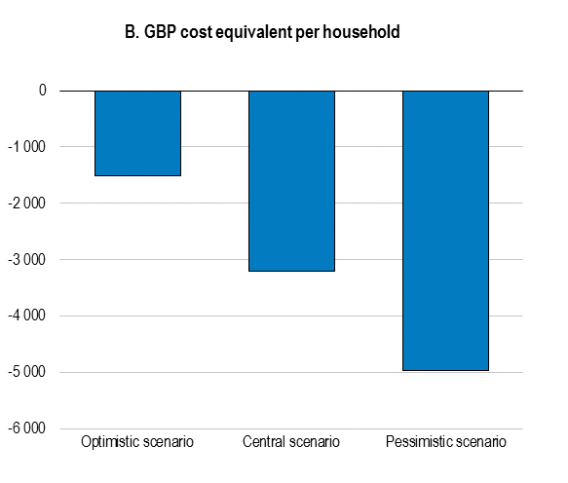 It’s true that a Brexit would be yet another unwelcome, potentially disruptive event for both the world economy and financial markets, but I refuse to jump on the panic bandwagon.

In fact, my opinion is that a Brexit’s negative global-economic effects would be muted, while any shock to world stock markets likely short-lived. That’s partly because tomorrow’s vote is actually just a recommendation, not a legally binding order to the U.K. government.

While there’s little doubt that British politicians would begin the process of exiting the EU if the referendum passes, heaven only knows how long that will take. (No country has ever quit before.)

Add to this the fact that the British officials who will be negotiating a Brexit with the EU are the same political leaders who are advocating staying. I don’t believe they’ll negotiate a worse trade deal with the EU than London already has.

In fact, Britain has been very successful negotiating with the EU up to this point. The U.K. obtained special status with the European Commission in February that effectively gives it the autonomy that many of “Leave” proponents want. For instance, the deal included:

So, I’m pretty confident that the British government will make things work with the EU regardless of tomorrow’s outcome. I also believe that financial markets will recognize this, and that we’ll be back to business as usual pretty quickly.

My advice continues to be that long-term investors should ignore the “noise” and focus on the things that really matter — having a durable plan with realistic goals, sticking to proper asset allocation and keeping a cool head.

And if the Brexit vote fails (which I expect), things will be status quo. In fact, my expectation is that we’ll all wake up Friday morning and get back to work, ready for the next headline to provide short-term aggravation to the markets!