There have been periods of outperformance by growth stocks, most recently in 2015. 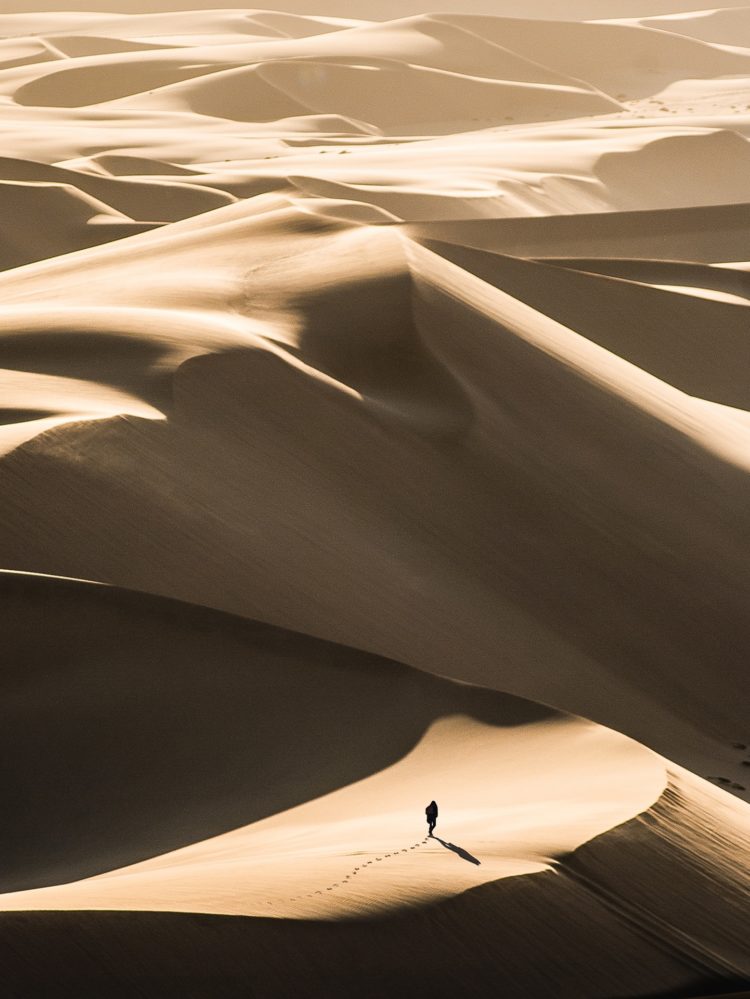 Over long periods of time, value stocks (as defined by a higher book-to-equity ratio) have consistently outperformed growth stocks (as defined by a lower book-to-price ratio). You’ve probably heard this line before, but it still holds true. Using data provided by Ken French, we can calculate the returns for both strategies since 1927. Based on the data, value has outperformed growth 13% to 9.2%. If we look at the rolling five-year average value premium, value has spent most of its lifetime dutifully outperforming growth. 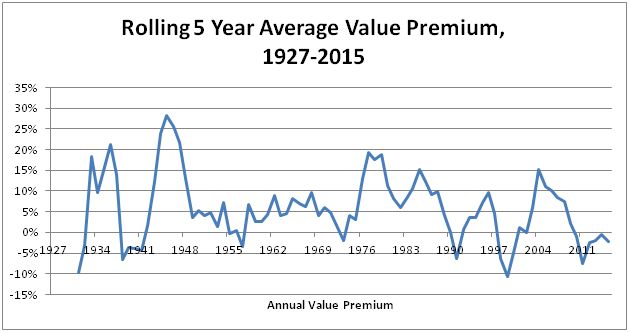 We can see several periods where growth has outperformed value. Each time, value has come back swinging.

It’s Always Darkest Before the Dawn

There have been periods where it has been difficult to maintain one’s discipline in the face of underperformance. The mid- to late 1990s was just such a time. Comparing value and growth using the Russell 1000 Value/Growth Total Return indices, value was underperforming growth over one, three, five, ten, and 20 years at the end of 1998. Growth stocks were exploding, the Internet was booming and value investors were considered out of touch. The following year was even worse, as 1999 saw growth return a premium of almost 26% over value. It was bleak at best for value.

The cycle reversed. By February 2001, value was outperforming growth over one, three, five, ten, 20 years and since inception (1979 for Russell indices) time periods.

Maintaining discipline in times of underwhelming performance is a difficult thing to do. It can be downright scary to see negative returns. Many investors tend to suffer from recency bias, the overvaluing of recent performance. This can lead to fearfully selling low and greedily buying high, the opposite of what we’d like to do. In fact, multiple studies conclude that, due to buying and selling at the wrong times, the average mutual fund investor earns significantly less than the average mutual fund return.

This is particularly relevant at this point in time. Chasing growth now may be a crucial mistake. As the below chart indicates, value has delivered strong returns following previous periods of underperformance. 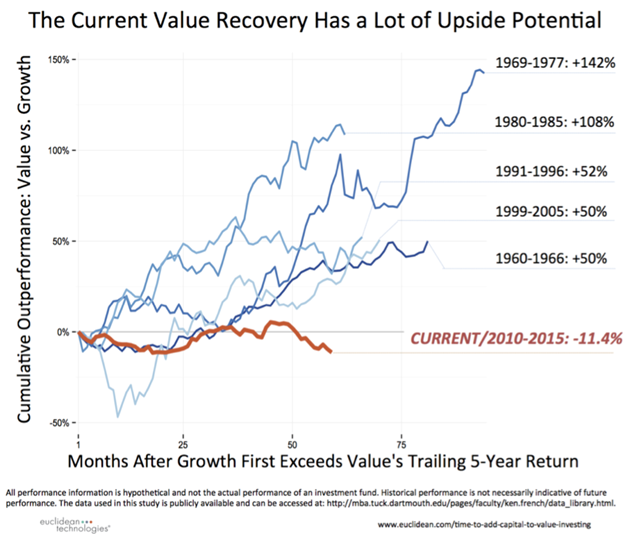 Despite periods of underperformance relative to growth, value has consistently outperformed over long periods of time. By maintaining a disciplined strategy, an investor may be able to outperform by holding value stocks.

Based on historical cycles, now may be a great opportunity to reallocate capital from growth to value.

Disclosure: I/we have no positions in any stocks mentioned, and no plans to initiate any positions within the next 72 hours.

I wrote this article myself, and it expresses my own opinions. I am not receiving compensation for it. I have no business relationship with any company whose stock is mentioned in this article.