Beware Of Drawbacks When Seeking Yield From Alternative Investments

When the traditional markets go down, many investors look to alternatives to continue building their portfolio. 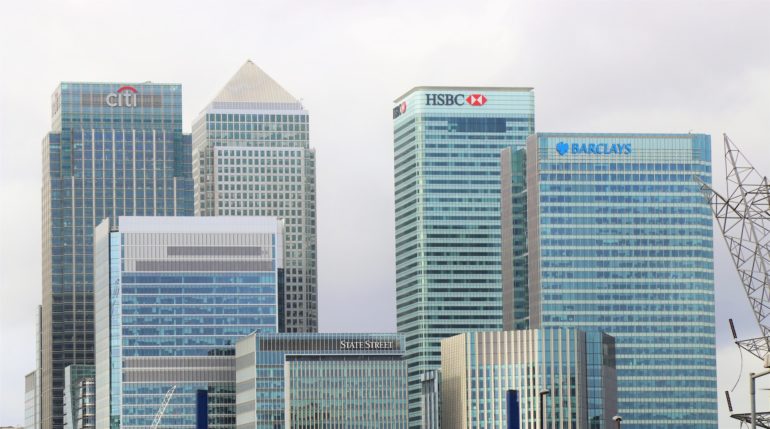 Ever since the start of the Great Recession, central banks around the world have been pushing interest rates lower through a combination of rate decisions and monetary easing. By 2016, Japan and several European countries – including Austria, Denmark, Germany, the Netherlands, and Switzerland – have dropped short-term policy rates into negative territory. With lower policy rates comes greater interest among investors to seek higher-yielding investments – typically, stocks.

Unfortunately, after an eight-year recovery, opportunities in stocks at reasonable valuations are slim pickings. A recent study from Goldman Sachs shows median stock valuations at 99th percentile, relative to prices going back to 1976.

For investors who maintain a broadly diversified portfolio without attempts at stock-picking and market timing, this is essentially a non-issue. However, it’s important to understand that stocks do reach levels where they may be considered “priced for perfection.” In other words, there’s a point at which it’s not at all unreasonable to expect significant price appreciation until markets go through the proverbial “pause that refreshes,” to cite an old Coca-Cola slogan! 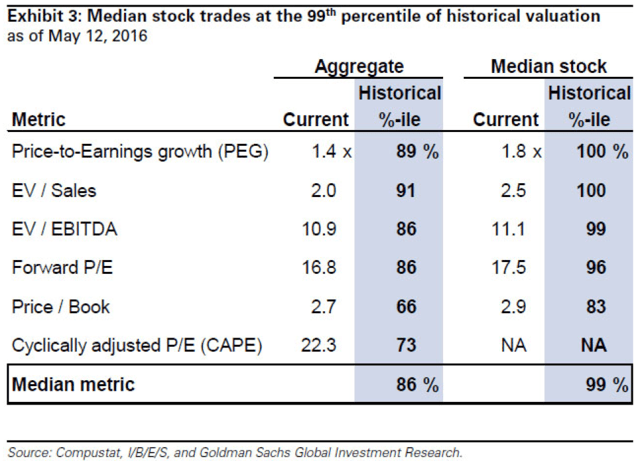 Don’t get me wrong: I am not saying you should start selling off your equities because valuations are high. Au contraire! I don’t condone or promote market timing, as it’s too easy to be wrong – either once (when you sell) or twice (when you buy back in). Sadly, many investors believe a certain type of market action is logical at a given time (usually to the downside) and bail out in anticipation. In recent years, they’ve guessed wrong, and frequently didn’t get back in to capture subsequent gains. It’s happened on more than one occasion in the past decade, with investors suffering huge opportunity costs from attempts at market timing.

With the S&P 500 hovering near record highs, it’s understandable that investors might feel the urge to sell out some or even all of their holdings, in an effort to preserve capital. But where should they turn? Does this mean parking assets in cash until “normalcy” (whatever that is) returns?

Or does it mean a look at so-called alternative investments? These can include commodities, real estate investment trusts, precious metals and even highly illiquid assets such as fine art.

A few years back, on the heels of the 2008 financial crisis, alternatives became popular with investors hoping for an asset to rescue them from poor stock market returns.

Unfortunately for those investors, U.S. stock markets began a strong rally in March 2009. Except for some bouts of volatility along the way, they’ve marched steadily higher. Alternatives, which typically show low correlation to equities, have not offered the returns that those fearful investors had anticipated.

Yet, the quest for yield continues, and more alternatives are garnering attention.

One such investment is alternative lending. Alternative lending goes by many names: peer-to-peer lending, social lending, P2P lending, and community lending. Simply stated, it is investors lending money to borrowers without a traditional bank.

In the alternative lending space, borrowers can be individuals looking for debt consolidation or small business looking for investment capital. Alternative lending began online in 2005, when Zopa launched the world’s first platform in U.K. In the U.S., Prosper started the first lending platform in 2006, and the market space flourished to a total loan volume of $77 billion by 2015.

The U.S. market is currently dominated by Lending Club, with a total of $20 billion in loans originated since inception. Average interest rate on 3-year loans are 11.37%, and on 5-year loans are 15.53%, with average rates across all loan terms at 12.76%. For borrowers, this is significantly cheaper than the average credit card interest rate of 15.07%. As with all type of lending, defaults are unavoidable, and after accounting for defaults, the returns to P2P investors are still quite staggering. The following chart shows average annual investor returns by credit grade. While these are not actual returns, it still provides a good idea of what to expect.

Even at the least risky tranche of grade A loans, where borrowers have excellent credit rating and default risk is low, the returns of 5.2% is still very attractive. On top of higher yield, investors are also investing in real people and not faceless banks or investment funds. Currently, there are two ways to gain access to alternative lending. The first is to invest directly through the platform for the do-it-yourself investors, and the second is to invest through an alternative lending fund. Going direct means registering with a lender such as Lending Club and choosing which loans among thousands to fund. Direct investment requires diversification, and many P2P lenders allow a $25 minimum investment in each loan. Investors can pick which loans to back, but at the same time, making the right funding selection requires one to know what they are doing in the first place.

The other route is going with an investment fund, and like for any other managed products, a manager will pick the investments and collect a fee before disbursing the returns. Currently, there are several major players in the institutional P2P space, such as Prime Meridian, Stone Ridge, DLIF, and NSR Invest. Each of these funds comes at a different cost, depending on how the fund is structured. Prime Meridian operates similarly to a private note and has long lock-up periods, StoneRidge offers a quarterly liquid mutual funds but is limited to pre-approved advisors, DLIF has no lockup but charges a performance fee like a hedge fund, and NSR Invest provides financial advisor access to a platform that helps clients choose loans to fund based on pre-selected risk levels.

Going with a fund saves investors from the difficult process of diversifying across credit levels and selecting which loans to fund.

While this may sound like an easy way to obtain higher yields, as in “too good to be true,” investors must be cognizant: P2P funds have risks of their own. Among the many negatives, first is investor lock-up.

Lock-up is referred to the period that investors cannot exit their investments because of either illiquidity in the underlying investment or under-funding at the fund level. So far, all of the alternative lending funds have lock-ups ranging from six months to a year. This may not sound like a significant problem on the surface, but for retired individuals, it creates an obstacle when it comes to raising cash for retirement needs. Either they have to under-invest in stocks and bonds because that’s where cash needs are met, or they have to time their sales during liquidation periods from the alternative lending funds.

On top of illiquidity, actual historical performances from commercial and retail lending is limited. Many alternative lending managers claim that alternative lending also suffered in 2008, but the entire sector never reached crisis level as many other investments did during that downturn.

But let’s drill down a bit more. Looking at historical data compiled by the fed going back to 1980s, delinquencies peaked in mid-2009 and are on the rise again since 2015. This spells trouble for the alternative lending space, as many alternative lenders operate in the commercial lending industry.

As of 2015, banks originated 43% of business loans of up to $1 million, down from 58% for all of 2009, according to PayNet Inc., a tracker of small business credit. According to FFIEC release in 2015, the net lending amount declined significantly at the biggest banks in the U.S. and has dropped by more than $10 billion at Bank of America.

With traditional lending from big banks on the decline, businesses are turning towards alternative lending for funding. Online lenders approved 71% of the loan applications they received in 2015, according to the Federal Reserve banks. That’s much higher than the 58% approved by big banks. While greater availability in funding also comes higher rates, average small business loans have APRs ranging from 9% at StreetShares to 108% at Kabbage. This is much higher than business loans at traditional banks that range from 3.2% to 3.72%, according to the Small Business Administration. Putting together the soaring lending rates, greater loan availability, and rising delinquencies, one can easily see the poor outlook and potential dangers in alternative lending. 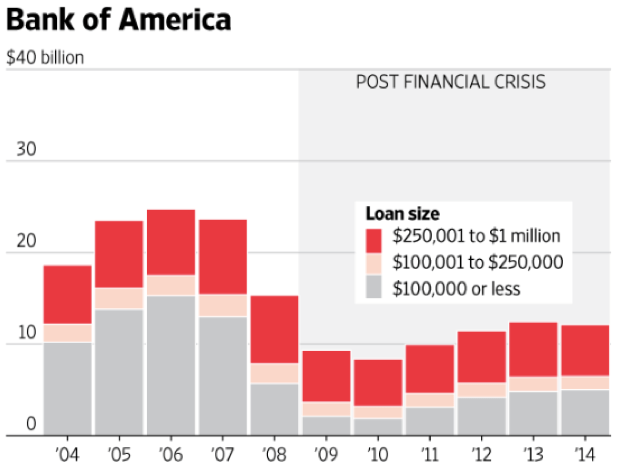 In addition to the fundamental troubles that hinder alternative lending’s future prospects, higher manager fees and lack of capital appreciation also chip away at the potential for higher yield. Fees are much higher on alternative lending funds compared to traditional bond funds.

Alternative lending has surged in the current interest environment; however, there are enough red flags under the surface for investors to be cautious. With limited liquidity, rising delinquencies, a high expense ratio, and nonexistent capital appreciation, the prudent path is to stick with traditional stock and bonds portfolios. Particularly, there are undervalued securities in foreign investments and risk-reducing funds in fixed-income markets that provide investors sufficient return potential along with volatility protection. 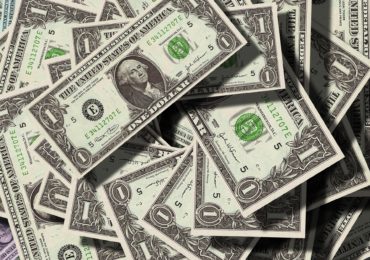 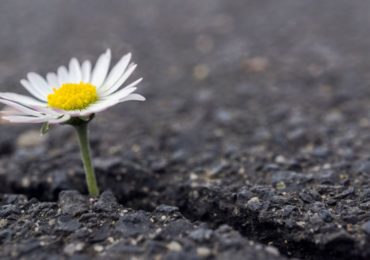 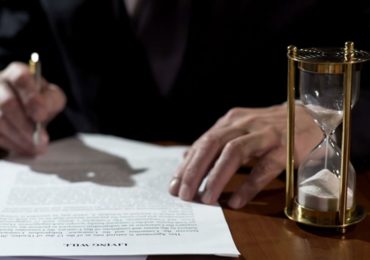